“Panicky despair is an underrated element of writing.”

This time last week, I was elbow deep in introduction scenes for both Anna and her brother, Aaron, and my goal was to have two completed scenes by week’s end.

Well, I accomplished half of my goal.

(golf claps all around)

Anna’s scene is rough, and bare bones, but it’s out of my head and down on paper.  Most of it works, some of it needs improvement, but that can come later.

That brings me to Aaron.

(Yes, it’s alright to sing that the way the nuns at Nonnberg Abbey did in The Sound of Music.  I won’t tell.)

I’ve said it so many times – Aaron is a pain in my ass.  However, I think he and I have come to a degree of understanding.  He will play a less significant back up role in this story.  His only real involvement – to briefly aid Anna’s quest by using his unique skill set.  In doing so, I promised not to kill him off before the mid-point.   I thought that was an excellent compromise.

Oh, and I’ve also changed his name.  Aaron and Anna.  Oy.  What was I thinking?  He will now be known as Lenk Schuyler.  Don’t judge.  This new name fits his role and serves a purpose.

In addition to the above scenes, I also worked on reconstructing my outline.  For those of you keeping count, this is version #5.  I’ve made a lot of progress with that.  Most of it is handwritten and as I type up my chicken scratch, I have expanded upon scenes and themes, and will continue to do so.

So what’s the low down skinny?

Actual accomplishment:  One workable scene, a character redesignation, and a partial outline.

Next week’s goal:  Continue with the outline – map through to the rising action, at least.  Write Leo Baxter’s inciting incident scene.

“What fun is it being cool if you can’t wear a sombrero.”

I learned this week:

…that it is possible to earn an A in Geology.

Who knew? Not me.

Let’s see if I can do it again next semester.  I am feeling so froggy about it that I have registered for Historical Geology.

…that having a home office does not guarantee peace and quiet.  The night before my two most challenging finals, I retreated to my new sanctuary for a little study time.  I’m not sure when it happened or even how it happened, but an hour in I looked up at the sound of an awful ruckus and realized my space had been invaded by two cats, a dog, and a kid.  Really?  I had more solitude in the living room.

…that dropping my dog off at the groomers (until two months ago, I’d only owned cats) was a little like leaving a toddler at daycare for the first time.  There was lots of whining and crying and forlorn looks that said:  “Why, mommy-lady?  Why are you so cruel?  I’m really sorry I ate your slipper.  Really.  I am.  Don’t. Leave. Me.” Of course, as soon as I left the building, Kevin the groomer dude became Rocco’s new best friend and I was completely forgotten.

…that I still don’t get the allure of twitter.  I used to have an account a couple years ago – for about a week.  I didn’t understand the point, so I deleted it.  This week I am trying my hand at it again.  All of my writer friends are doing it.  I feel left out.

I think it’s just beyond my capability.  All those cryptic codes and hash tags.  It makes no sense.  Plus, it seems like an awful lot of work to maintain.  I can’t even get myself together enough to blog regularly let alone come up with something witty and interesting to tweet several times a day – in less than 140 characters.

…that I am too old and snarky to spend 11 hours riding on a bus to and from Houston with a bunch of sugared-up middle schoolers without the benefit of coffee…or booze.

…that just when I thought human depravity had reached its peak, I am yet again proved wrong.  I cannot begin to fathom the level of grief felt by the families of those killed in the Sandy Hook shooting.  My heart aches for everyone involved.

I usually don’t like to delve too deep into political (or religious) ideologies on this blog.  I find that in this digital age where every Tom, Dick, and Harry has an opinion, a keyboard, and the luxury of anonymity such discussions deteriorate into hate filled tirades not intended to find resolution, but rather to shock and offend.

Having said that, I would like to have my say:

I believe in the Constitution. I believe in the Supreme Court’s authority to interpret the intended spirit of the Second Amendment.  I believe in an individual’s right to protect his/her person and property.  I do not, however, believe civilians have a need for military grade assault weapons or magazines that hold dozens of rounds.  I do not believe a ban on such weaponry would seriously impinge upon a citizen’s constitutional rights, and I think it’s passed time for rational dialogue on how we prevent the recurrence of such senselessness.  Of course, then there is the issue of the perpetrators themselves – the ones who yielded these weapons.  I do not have hard statistics, but I think a blind man could see that a good number of these shooters are plagued by some form of mental illness.  This is a problem.

How do we fix this?  I honestly do not have the answer to that question.  What I do know is this:  This will happen again unless we can set aside our egos and self-promoting ideologies and move toward a real solution through meaningful conversation and compromise.

…that I don’t have an awww moment of the week, so I will leave you with a photograph I took recently of the Day of the Dead bride and groom figurines I brought back from my last trip to Mexico.  I bought them to commemorate the 15 years my husband and I had been married (at the time).  We are now two weeks shy of our 17th anniversary.  I just love these little guys.  They make me smile. 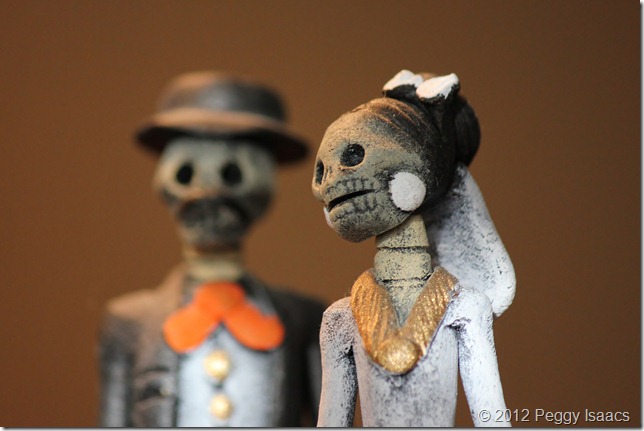 A daily selection of the best content published on WordPress, collected for you by humans who love to read.

Murder Down To A Tea

City by the Lake

A collective of poems and photos. All photos taken by me unless stated otherwise.

Six writers who love words and who read, write and critique together.

My journey as a writer and my various hobby's .

The Insanity of Fantasy

and other tidbits of thought

The Official Website of Erin Long
Pride in Photos

the hour of soft light...

How do I know what I think until I see what I say? (E.M. Forster)

Top 10 of Anything and Everything

an adventure in reading, writing & publishing

It's all about disbelieving your thoughts

This is Not Going to Turn Out Well

An archaeologist finds herself writing fiction — what stories will she unearth?

This is the story of me writing my first novel...and how life keeps getting in the way.

Patrick Ross on Creativity, Writing, and an Art-Committed Life

Thoughts from a bookworm

A blog about Writing, Reading, and Reinventing your Life

Engrossed in books and study.

Ideas and encouragement for writers.

Irma Prattle, who has a high rise condo behind my ear, pokes me to write, and when I’m finished she says, “Now, doesn’t that feel better?” My answer: “Yes and no.” I think she wants to be me.

surfing the ocean of language

A collection of the sweet morsels in my life

One man and his camera

Experience with me the trials and accomplishments of publishing a novel